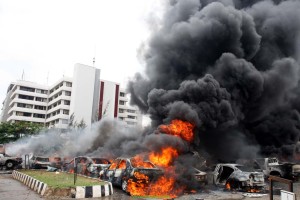 Hardly any good news comes out of Nigeria these days. From the inauguration of a not-so-inspiring cabinet by President Goodluck Jonathan; rumours of covert plans for tenure elongation for elected officials; the tension generated by the recently concluded general elections and the violent aftermath; the bitter national debate sparked by the introduction of Islamic or non-interest banking by the Central Bank of Nigeria (CBN) it is depressing and uninspiring news all over. The most disturbing news by far revolve around the deadly attacks and terror unleashed by the Boko Haram sect against Nigerians from all walks of life – Muslims, Christians, law enforcement officers and politicians. Hardly a day goes by without bomb attacks going off in one part of Nigeria or the other especially in Maiduguri in the North-East and increasingly in Kaduna, the heart of Northern Nigeria.

My intention here is not to summarize or analyze this deadly Boko Haram saga for more in-depth analyses have been made by far more competent and knowledgeable people: a genesis of the group and its activities is provided by the only reporter probably to interact with the top hierarchy of the sect and also by Alkasim Abdulkadir; an objective straightforward analysis of the situation and even possible solutions by Simon Kolawole, by Dr. Aliyu Tilde and fellow blogger Joachim MacEbong; an insightful analysis by Mujahid Asari Dokubo and a disappointingly bigoted opinion by former Minister Femi Fani Kayode. However, my focus is on the fear and national paranoia this has generated which has led to some questioning the very basis of the existence of the nation with some out-rightly calling for dissolution of the Nigerian state, raising the age-old National Question. And for us the youth, we feel a sense of disillusionment, confusion and uncertainty at the gloomy future that lies ahead and what kind of Nigeria, or lack of, we and our progeny will live in. This notwithstanding, the problems of Nigeria have more to do with lack of a lasting elite or political consensus manifesting in bad leadership which everyone has been lamenting about and less to do with the need for separation or disintegration of the various ethnic nationalities.

This Boko Haram saga especially the attack on the Police Headquarters a few weeks ago not only revealed the gross incapacity of the nation’s security agencies to maintain law and order and to secure lives and property, it has severely undermined the Nigerian state’s monopoly of violence and shows that nobody is safe. More importantly, it is another chapter in the nation’s history where a group is rebelling and taking up arms against the state. We have seen violent and militant ethnic nationalism by groups such as MASSOB in the South East; OPC in the South-West; MEND, NDPVF and a host of others in the Niger-Delta or South-South and now Boko-Haram in the North East. These are symptomatic of dissatisfaction in the social contract between the citizen and the state, but also breach of trust amongst communities that they are retreating to their primordial ethno-religious loyalties and willing to terrorize or kill fellow community members. These have simply echoed the cries of marginalization and alienation, injustice and domination by various ethnic groups at different points in time in the country’s history which frequently erupt in unrest and inter-ethnic communal strife on the one hand and calls for secession or separation by the more intellectually oriented members of these communities. With the Boko Haram saga now, we are back to this age old Question of to be or not to be, whether to dissolve or at least renegotiate this “mere geographical expression” in the words late Chief Obafemi Awolowo.

Therefore as usual, we see so many public commentators, journalists, columnists and ordinary citizens issuing ignorant, bigoted and near-racist comments acting as if all the problems of Nigeria were caused by one part of the country, twisting facts and history upside down, allowing themselves to be so overcome by passion, emotion and paranoia which is beclouding their sense of reasoning. However, as the eminent Professor Chinua Achebe rightly notes, the root of our complex problems in Nigeria is “squarely that of bad leadership” and of lasting political settlements among various groups – almost a cliché at this point – not of self-determination or the need to create several multiple republics.

This is because first and foremost, for all those calling for the division and separation of Nigeria, how exactly do they envision such a division to take place, in a country with an estimated 250-500 ethnic groups? Would it be divided along the three major ethnic groups i.e. Hausa/Fulani, Igbo and Yoruba; or taking other big ethnic groups like Nupe, Kanuri, Efik, Ijaw, Urhobo, Tiv, Igala into consideration; or along the six-geopolitical zones North-West, North-Central, North East, South-South, South-East and South-West or would each of the hundreds of ethnic groups have their separate countries/republics? The issue of self-determination is very dicey and delicate particularly in Sub Saharan Africa with all its heterogeneity. How is that to be overcome? Won’t every hamlet, clan, village, locality start agitating for self-determination within these republics?

Secondly and most importantly, such separatist agitation(s) have bordered on allegations of marginalization or fear of domination by one group or the other at various times; inequality; bad governance and of course the resultant periodic communal violence that claim thousands of lives. Even before independence in 1960, the major ethnic-groups have been competing with one another, living in perpetual fear of either being dominated by the other – the more educationally advanced South in mortal fear of the North’s political domination and “savviness”, while the educationally challenged North in mortal fear of the South’s educational advancement and dominance of the Civil Service. This tension and intense competition contributed to the unrest that led to the first coup in 1966, the thirty-month Civil War from 1967 and its aftermath; cries of marginalization by the Igbos, the Niger-Deltans, Yorubas and now the “Northerners” (read Hausa-Fulani’s) with the recent election of Dr. Goodluck Jonathan and truncation of the PDP’s zoning agreement.

The North is accused of holding power for thirty-something out of the nation’s fifty-year history and thus is responsible for its underdevelopment and backwardness; of not contributing productively to the nation’s purse, but draining its resources and depending on oil revenues from the oil-rich but impoverished Niger-Delta by ensuring the operation of a weak federal structure through the 1999 Constitution bequeathed by the military of mainly Northern extraction. Then again Northerners argue that the first coup which truncated the country’s nascent democracy was carried out by Igbo (South-Eastern) military officers – Major Chukwuemeka Nzeogu Kaduna and later Major-General Aguiyi Ironsi who enacted the Unification decree in 1966 that truncated the regional federalism in existence and that it was Northern military rulers who restored the nation’s federalism through state creation by Yakubu Gowon, Murtala Mohammed, Ibrahim Badamasi Babangida and Sani Abacha regimes; that revenues from agricultural produce were used to prop the nation before the discovery of oil in the 1950s and subsequent reliance on oil revenues from the 1970s; that in the last 12 years of democratic rule with so much oil revenues the Southern President (Obasanjo) had all the opportunity to turn the fortunes of the country around…and so the blame game rages back and forth, and has continued to do so since the country’s independence.

But is separation really the solution? As stated earlier, the problem with Africa and Nigeria, its most populous country is the lack of visionary and strong leadership that directs and manages resources of the country for developmental purposes; political leadership that negotiates lasting, transformational political settlements amongst the competing elites that unites them; leadership that inspires the younger generation and future crop of leaders. Infact, the UK Department for International Development (DFID) in a report in 2010 concluded that good leadership is linked to political processes and political settlements which lay the foundation for preventing conflict and bringing sustainable peace, promoting reform, development and poverty reduction – or failing to achieve any such progress. It is such transformational leadership in Botswana by nationalists like Seretse Khama and subsequent leaders that negotiated lasting political consensus among the various groups and interests which has resulted in relative peace, steady economic growth, judicious management of revenues from diamonds and medium human development ranking at number 98 in the fellow sub-Saharan African country, while the “Giant of Africa” trails behind at a disappointing 142 on the UN’s (Human Development Index) HDI 2010.

This dearth of leadership in Nigeria is at all levels of government – council, local government, state and national level characterized by lack of transparency and accountability on the part of leaders, irresponsibility, disregard for the rule of law, manipulation of followers with ethno-religious sentiments and so on; and cuts across all regions North and South. Cases of corruption with the EFCC include Nigerians from all regions – James Ibori the former governor of Delta state now standing trial for money laundering in the UK is from the South-South; Dimeji Bankole former House of Representatives Speaker embroiled in a fraud scandal is from the South-West; Salisu Buhari one time  House of Representatives Speaker accused of certificate forgery is from the North-West.

When it comes to violence, true these days it is more prevalent in the Northern part of the country. But inter-ethnic conflict and violence have been and still are prevalent in other parts of the country such as Yoruba-Hausa community in Shagamu, Ogun State; Eleme-Okrika in Rivers State; Itsekiri-Ijaw/Urhobo in Delta State; Aguleri-Umuleri in Anambra State; Ijaw-Ilaje conflict in Ondo State and others. And most of these conflicts are not purely ethnic or religious, they have economic undertones. People impoverished by poverty, hardship and bad governance have nowhere to turn to, they retreat to their primordial loyalties because the good governance and leadership that will unite them is severely lacking. So what makes people think that mere division of the country will solve these problems? If anything without a lasting political consensus, these problems of bad leadership will simply be replicated in the several republics that will abound, and so will the inter-ethnic competition and rivalry, for in all the six-geopolitical zones, there are many other ethnic nationalities as well, that is assuming the country is to be split along the six-geopolitical zones. Dividing the country will not automatically lead to nirvana as we can see even in the newly independent South of Sudan, a corruption scandal is brewing in the finance ministry where over $2 billion dollars is missing. Ambassador John Campbell gives a clearer picture of the challenges confronting the newest nation-state in the video below:

Therefore, with these problems and many more, dividing Nigeria without resolving them first will not bring about automatic solutions but might simply replicate them in multiples. That notwithstanding, it is becoming clearer that calls for convening a SNC are becoming louder and becoming increasingly inevitable, because everyone is reaching a tipping point. Lives are lost, tension is so high, the Southerner blames the Northerner for feeling a sense of entitlement to power after being in “power” for over 3 decades, the Northerner feels unfairly accused and now feels short-changed in the current political equation; there has been a fundamental breach of trust, Nigerians don’t trust one another, neither do they trust the Nigerian State. The polity is over-heated such that if the temperature increases anymore as a result of any new crisis, it will literally become hell on earth. It is high time for meaningful national dialogue – not the national confab-type sham organized by Obasanjo which ended up becoming an avenue for sneaking in the defeated tenure elongation plans – to discuss our problems and grievances and reach amicable consensus on how we will live peacefully for disintegration is a difficult path we would want to traverse.

14 thoughts on “National Paranoia and the National Question”