I have always heard that Nigeria’s borders are porous, I never quite grasped the magnitude of the “porousness” until I received these pictures below of the Nigeria-Niger border at Birnin Kuka. I kept thinking afterwards, of a word synonymous with, yet which would signify an extreme form of “porousness”, combined with the words “Useless” “farce” “joke” and “ridiculous”  to capture this incredible scene, but I couldn’t quite come up with any.

Just in case you still aren’t sure whether you saw the word “border” or not, or you think this is some rather early April Fool’s prank or that perhaps your eyes are playing tricks on you, its none of those things. This is actually Nigeria’s border with Niger Republic, at a small border town called Birnin Kuka in the North-Western state of Katsina. The person on the left wearing red and white trousers is an officer of the Nigeria Customs Service (NCS) while the one on the right is a “Camp boy”, a term describing locals of any border post or out station recruited by officers of NCS. And what you’re thinking at this moment is right on point: the tree logs in the pictures literally demarcate Nigeria from Niger Republic; crossing the logs means you’ve crossed over to the other country! 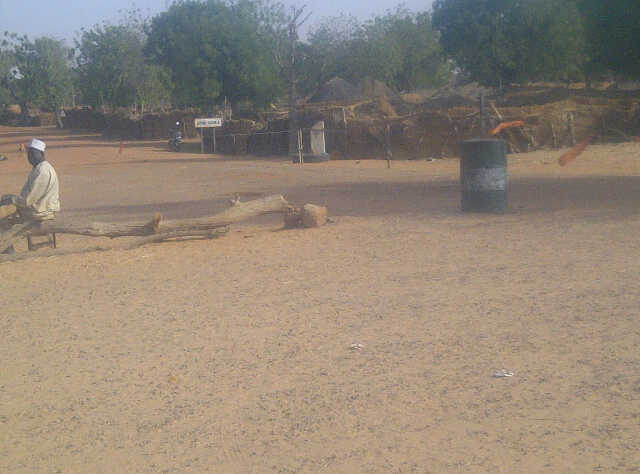 These pictures were sent by a source at the NCS and are very much authentic. The source  confirmed that apparently, with as little as N100 (less than $1), anyone can conveniently and comfortably cross the border to the other side.

So if like me, you’ve been wondering how the North African affiliate of Al-Qaeda, the “Al-Qaeda in the land beyond the Sahel” (AQIM) wormed its way into Nigeria especially in light of the recent abduction and murder of the British and Italian hostages and the recent capture of a German hostage in Kano, then this is your answer right here. A large white mammoth from the prehistoric era could traverse this boundary without anyone raising an eye brow. So, for a highly sophisticated and secretive terrorist organization like Al-Qaeda, it would literally be a walk in the park, or in this case, a stroll in the desert!

Let me state categorically that not all of Nigeria’s border towns or entry points are this disorganized, poorly managed, poorly manned, insecure, and a throw-back to the medieval era. For instance the more well-known entry and exit points like the Seme border in Lagos, the Jibiya border station in the same Katsina state and a number of others are far more organized and relatively more secure than the Birnin-Kuka border in terms of having a proper border station, guards, sentries and immigration/customs/border officials and all the works. However, many of the less-known boundaries are like the Birnin-Kuka border post: poorly manned or in some cases just wide open, probably due to the lack of sufficient and trained officers, paucity of funds (But the government earmarked N922 billion or $6 billion for security in this year’s budget!) and just nonchalance and lack of foresight on the part of the authorities, that is the Nigeria Customs and Immigration Services respectively.

My source confirmed that even the relatively more organized border posts like the Jibiya station below “are OPEN” but in this case not to everyday individuals who can pay N100 but especially to “big men” and  “smugglers”. The source made particular reference to a renown, wealthy and influential smuggler whose trade is now flourishing more than ever as scores of his trucks laden with smuggled goods pass through weekly without being inspected.

The source further confirmed that “Big Men are dreaded by officer(s)” who “earn little” and as for the renown smugglers, if an officer insists on searching their trucks, you “search and you risk getting sacked”.

The perviousness and porousness of Nigeria’s borders are an addition to the litany of shortcomings the Nigerian state is facing towards addressing security challenges. Already there’s the incapacity and mediocrity of the police and security agencies, dearth of intelligence gathering, politicization of insecurity by politicians, pervasive corruption and mismanagement of funds, widespread public paranoia and now to crown all these are our very porous borders.

These depressing facts further reveal the government’s weak position in combating the growing terrorist insurgency in Nigeria. For that, I’ve let my imagination become very active envisioning (nay hoping) a scenario unfolds where the various terrorist groups — the main Boko Haram, its various factions and AQIM — clash over turf and territory, and such turf war becomes very bloody where they mutually annihilate each other. This is a bit of a stretch I know, but you know how the saying goes: desperate times…!!