I don’t know about you but in the recent past, I had thought the debates in international development in this century had become rather stale. We had moved from Africa the “Hopeless Continent“, “Africa’s Growth Tragedy“, the continent of the “Bottom Billion” and the Trade vs. “Dead Aid” debate, to “Africa is Rising”, Africa “the Hopeful Continent“, Africa “the Next Frontier”, Africa “the Continent of Opportunity” and so on, all heralding Africa’s recent economic “successes” and the vast opportunities that lay ahead. Admittedly, some have adopted a more cautious approach to the overly optimistic Africa-is-Rising narrative.

In the midst of this heated rising- or not-rising-yet debates, the economic historian at the Simon Fraser university, Morten Jerven, burst onto the scene with his position that “we have no idea if Africa is Rising” because we can’t trust the numbers. I came upon Jerven’s work sometime last year through several fascinating academic and op-ed articles he wrote about development statistics and more recently, his foray into the Africa-Rising debate. Coincidentally this week, Jerven was at my department to talk about his recently published book, Poor Numbers: How We are Misled by African Development Statistics and What  to do About It, in a very “lively and refreshing” (words used by at least three people who attended) seminar.

The main  thrust of his argument is that statistics on African economic development (estimates and growth series on poverty, income and population) are unreliable because of the poor statistical capacity of many Sub-Saharan African (SSA) countries from which data on these indices are derived. He notes that it is these data compiled by severely under-equipped national statistical agencies that are used by international financial institutions and development agencies of rich countries.  Jerven points that in extreme cases such as Somalia where economic data is not always available, the World Bank sometimes adds up economic data from neighbours Kenya and Sudan, calculates an average from these, and then uses this average to make projections about Somalia!

Jerven posits further that the Strucutral Adjustment Program (SAP) of the 1980s had a devastating impact on the institutional capacity of such statistical agencies, and that the Millennium Development Goals (MDGs) agenda arguably further aggravated the situation because it put pressure on stretched and poorly-equipped statistical offices to prepare reports on social statistics related to the MDGs. This sort of pressure for specific data is symptomatic of a problematic trend towards collection of “ad-hoc data” by poorly equipped agencies, as the basis of “evidence-based policy” which in actuality ends up being “policy-driven evidence”, says Jerven. He thus makes a convincing case for improving the national statistical capacity of individual African countries in order to generate more accurate and reliable data, which he argues, have a huge impact on the welfare of citizens in Sub-Saharan African countries.

Indeed, the fact that a number of African countries including  Nigeria, are presently reviewing their Gross Domestic Product (GDP) base estimates which is certain to increase their national income, arguably confirms some of his core arguments. We are all familiar with how Ghana overnight, transitioned from lower-income to middle-income status on the 5th of November 2010 after the revisions bumped its GDP up by 60%. Nigeria’s GDP rebasing currently underway could see a huge rise in national income by 60% from $247 billion to $395.2 billion according to the Nigerian National Bureau of Statistics. Jerven says this revision could capture other economic sectors previously excluded which he equates to “40 Malawis (that) exist inside the Nigerian economy”. That is profound!

One important question however, is that even if the numbers are more accurately captured in these GDP revisions, and we realise that many SSA countries we hitherto thought of as “poor” or low-income countries, are actually closer to “emerging” or middle-income status, what do these numbers really mean for poverty reduction and human development? Are the poor and deprived in these countries leaving the poverty trap enmasse into middle class status? The statistics may be getting better, but are people’s lives getting any better? Importantly, what implications do these revisions have for the very definition of poverty and deprivation —  would these concepts need to be revised and redefined too? These are fundamental questions that policy makers, development experts and researchers ought to, and are hopefully thinking about.

In the meantime, I got my own copy of Jerven’s book signed. 😀 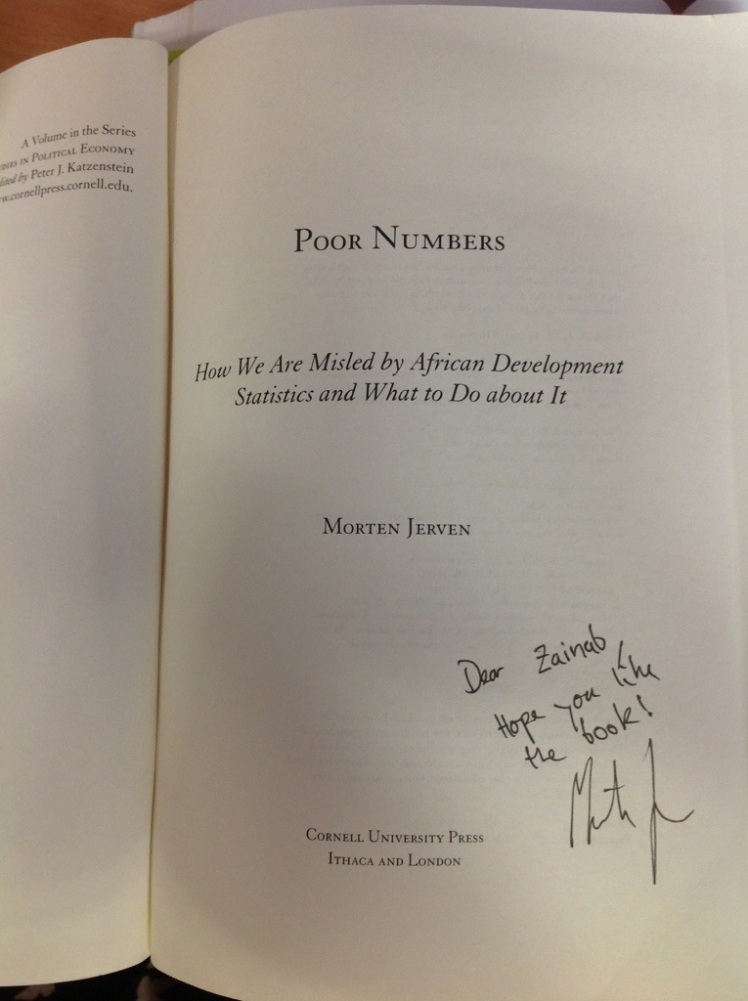